When Heartland Real Estate Business decided to write a feature on Chicago’s newest mixed-income developments – projects that house market-rate and affordable units under the same roof – we pitched and secured coverage for several of our clients in this space. The cover story profiled Schiller Place Apartments, a 48-unit building on the Near North Side co-developed by Taylor Johnson clients Structured Development and Evergreen Real Estate Group, and also highlighted two mixed-use, mixed-income projects by TJ client The Habitat Company: Ogden Commons in North Lawndale and 43 Green in Grand Boulevard, which Habitat is co-developing with P3 Markets. Serving as one of the general contractors on both Ogden Commons and 43 Green, as well as 508 Pershing at Oakwood Shores in Bronzeville, which was also noted in the article, is TJ client James McHugh Construction Co. Read the full story here to learn more about the recent rise in mixed-income developments and the push to bring them to more affluent neighborhoods. 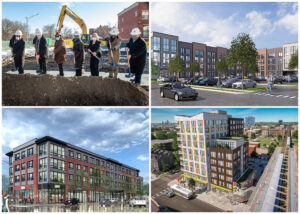