Congratulations to Taylor Johnson client Kinzie Real Estate Group on its third anniversary, which company executives celebrated this month at Kinzie’s annual client appreciation party. And it looks like three years will be a charm for the multifaceted firm. President Steve Spinell recently announced former Glenview planning director Mary Bak joined the team in the role of development services advisor, while Kinzie also passed the 50-percent-sold milestone at Enclave at Heritage Estates. And the Kinzie brokerage division has been busy, too, with its most recent luxury listing being the subject of this article from Chicago Magazine.

Architect David Adler’s only Winnetka work is on the market at $1.599 million. 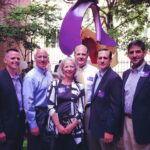