BKV Group, a holistic, multidisciplinary design firm, today announced the completion of Beckert’s Park, a 2.75-acre mixed-use project bringing 325 luxury apartments and a new 60,000-square-foot Safeway grocery store to a prominent corner in the Capitol Hill neighborhood of Washington, D.C. Located at the corner of 14th Street and D Street SE, the development replaces a parking lot and existing Safeway store that stood on the site for nearly 50 years.

BKV Group worked with developer Foulger-Pratt to create a design that adhered to the aesthetic imperatives of the historic neighborhood while addressing the needs of the community, where few Class A apartments have been developed in recent years. The resulting building is a single structure designed to look like a collection of buildings that includes not only the residential units and upgraded Safeway, but also 8,000 square feet of commercial space for smaller local businesses.

“The redevelopment of this prominent corner in the Capitol Hill neighborhood was an incredible opportunity for both Foulger-Pratt and the community, but it needed to be handled with sensitivity to the surrounding architecture,” said Jack Boarman, founder and CEO of BKV Group. “Our solution truly transformed the site from one that detracted from the urban landscape to one that not only integrates seamlessly with the neighborhood, but also adds a robust mix of residential and retail that will serve the community for years to come.”

BKV Group worked within the parameters of the local zoning, which called for a 50-foot limit on building height and excluded ground-level residential. The firm also designed around the requirements of the grocery store, which included the need for ample parking, loading areas, high ceilings and appropriate space for and access to back-of-store operations. The solution included a single-story podium that houses the retail and amenity spaces, with three stories of apartments and a setback penthouse level above. Parking for residents and Safeway customers is located underground, enhancing the pedestrian experience at street level.

The facade of Beckert’s Park incorporates different typologies to create the impression of a smaller overall scale, using a mix of materials including traditional red brick, black corrugated metal panels with charcoal brick and white fiber cement siding. This integration of traditional with modern achieved an aesthetic balance that appealed to the community.

“The goal for this project involved designing a mixed-use building on a highly visible infill site surrounded by low-density residential,” said Brigg Bunker, managing partner and co-COO of Foulger-Pratt. “BKV’s multidisciplinary approach and creative design solutions contributed to a productive community approval process, which laid the foundation for our timely delivery of this project despite the many challenges posed by the pandemic.”

Residences at Beckert’s Park include studio, one-, two- and three-bedroom units ranging from 495 to 1,706 square feet, some with private outdoor space. All apartments feature quartz countertops, customizable closets and in-unit laundry, and some include moveable kitchen islands and double sinks in the primary baths.

A courtyard accessed from D Street serves as the residential entrance to the building and features an outdoor pool, seating, cabanas, dining areas and grilling stations – all slightly elevated from street level to provide separation from the public and height for the underground parking. Indoor amenities surround the courtyard and include an expansive lobby with lounge seating and coworking space; clubroom with catering kitchen; game room; fitness center; golf simulator; and pet-washing station. A multifunctional indoor sport court is situated along a wall that is shared with Safeway.

“The completed Beckert’s Park fulfills our vision of creating an architecturally integrated development that brings upscale rental housing to the neighborhood while providing a new home for Safeway, which has been a retail cornerstone for decades,” said Bryan Foulger, who also serves as managing partner and co-COO of Foulger-Pratt. “BKV Group’s design merges the historical character of Capitol Hill with the modern amenities today’s renters seek, establishing a new neighborhood anchor that will serve both residents and neighbors in the surrounding community.”

For more than 40 years, BKV Group has designed and delivered community-enhancing, award-winning projects across a multitude of sectors including market-rate multifamily, student living, senior housing, affordable housing, government and federal, education and library, corporate and commercial, hospitality and mixed-use. Throughout BKV’s history, the firm has grown from a sole proprietorship into a diverse partnership with practice sites in Chicago, Dallas, Minneapolis, Washington, D.C., and Hanoi, Vietnam. The firm’s holistic approach encompasses a variety of services including architecture; interior design; landscape architecture; mechanical, electrical and structural engineering; construction administration; and planning and pre-development. This integrated methodology ensures streamlined communication between disciplines to find the best design solutions under budget and time constraints while removing redundancies in the process and enhancing the design and function of each project. For more information, visit bkvgroup.com. 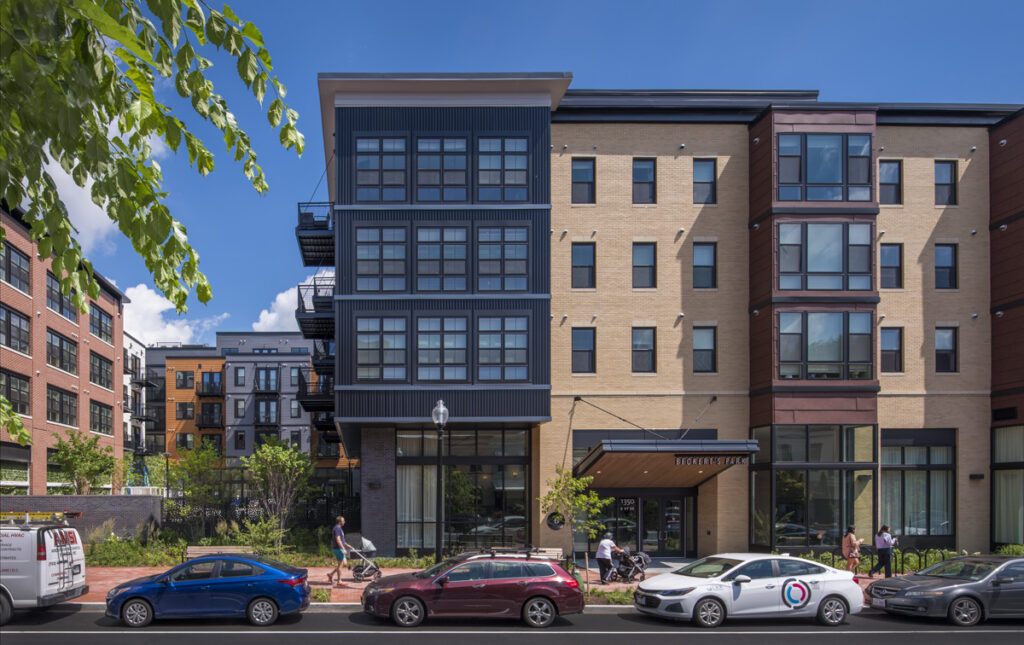 Though it is a single building, Beckert’s Park was designed by BKV Group to look like multiple structures to match the aesthetic and scale of the historic Washington, D.C., neighborhood. 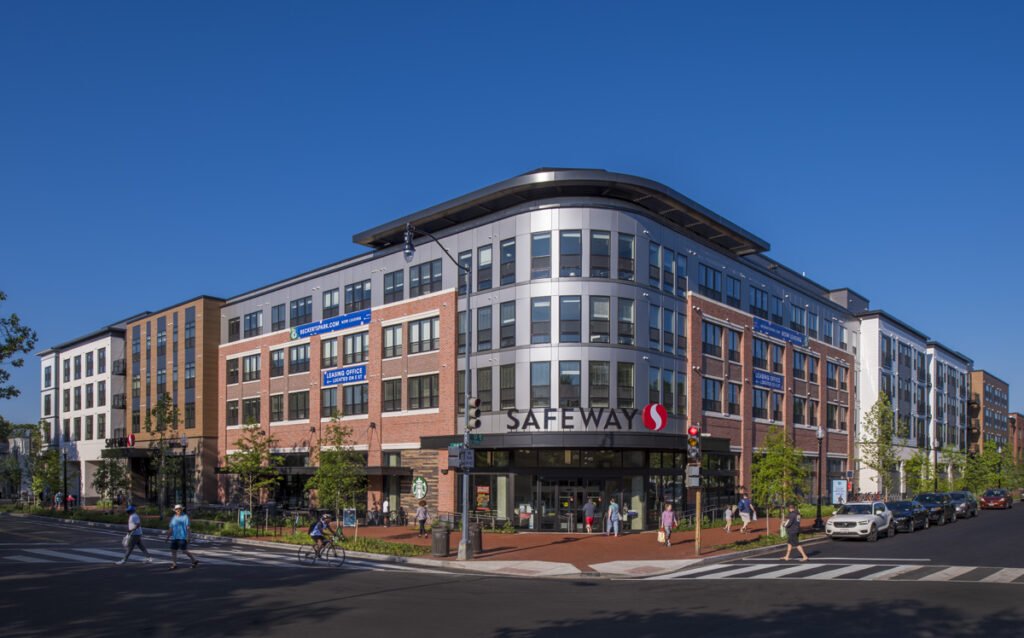 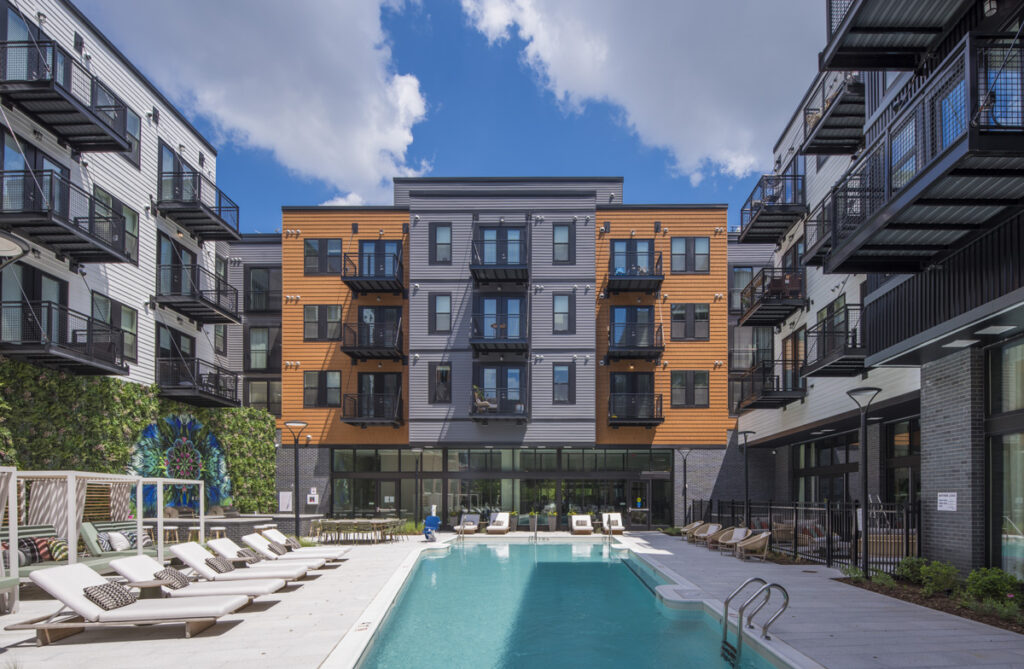 BKV Group incorporated mixed materials, including corrugated metal, cement siding and brick, to create a balance between traditional and modern.