Englewood Construction, one of the country’s leading commercial construction firms, announces it was awarded multiple recreational cannabis dispensary projects in Illinois, including The Herbal Care Center in Chicago, Windy City Cannabis locations in Highwood, Carpentersville and Macomb, and a Curaleaf dispensary in Westmont. Additionally, Englewood has begun work in Las Vegas for a Zen Leaf location for Chicago-based Verano Holdings. In Pennsylvania, the firm recently completed a Rise location in Erie, and a Zen Leaf dispensary in Altoona.

“Cannabis is showing itself to be quite the pandemic-proof industry, as most dispensaries have been able to remain open since last March and cannabis operators continue to add new locations to meet strong demand – particularly in markets where recreational marijuana has recently been legalized and they want to make inroads,” said Bill Di Santo, president of Lemont, Ill.-based Englewood Construction. “While Englewood has been very active with cannabis work over the last several years as a natural extension of our vast retail and medical office experience, this sector has represented a larger percentage of our portfolio over the last 12 months as we engage with national clients on a repeat basis in new markets.”

Englewood Construction was tapped by The Herbal Care Center to build an 8,000-square-foot recreational dispensary at 222 S. Halsted in Chicago’s Greektown neighborhood. Designed by Chicago-based architect Studio ARQ, the location is the adaptive reuse of a former restaurant. Construction will be completed this spring.

“While there was an initial rush to obtain licensing for dispensaries in Chicago after Illinois legalized recreational marijuana in 2020, it’s been slower to see projects move forward and start construction due to license issuance and zoning and permitting approvals,” said Di Santo. “This is the second recreational dispensary we’ve built out within Chicago’s city limits, so we’ve been able to not only leverage the local relationships and resources we have in our home market, but also bring our knowledge of the dispensary approval and permitting process to ensure this project proceeds as smoothly and quickly as possible.”

Continuing its relationship with Windy City Cannabis, for which Englewood has already completed two Chicago-area dispensaries this year, the firm is now building out Windy City Cannabis locations in Highwood, Carpentersville and Macomb, Ill. The Highwood and Macomb dispensaries are former restaurants, while the Carpentersville location is a repurposed stand-alone retail store. Des Plaines, Ill.-based Camburas Theodore was the project architect for all three 5,000-square-foot locations, which are all on track to be completed in March.

“Particularly in suburban areas and smaller towns, vacant retail and restaurants are usually a smart choice to repurpose as a dispensary,” said Di Santo. “They typically have a great location with high visibility, sufficient parking in place and the footprints lend themselves well to conversion to a cannabis facility.”

Also in Chicago’s suburbs, Englewood is building out a Curaleaf dispensary in Westmont. The 4,700-square-foot facility was previously a day care center. Camburas Theodore is the project architect.

Demonstrating its capabilities as a national commercial contractor that manages projects for clients across the country, Englewood is currently building out a new recreational dispensary in Las Vegas for Verano Holdings. Located on West Craig Road in North Las Vegas, the 3,963-square-foot Zen Leaf dispensary is on track to be completed in February. Chicago-based Collective Office Architects designed the plans to repurpose an existing home interiors store.

“Like all municipalities across the country, Las Vegas has its own unique requirements for cannabis facilities,” said Di Santo. “As a national construction partner working with clients to roll out their brands in different states and geographic regions, we’re especially adept at getting up to speed with the local guidelines and municipal criteria, and anticipating – and planning for – potential speed bumps based on our experience navigating the cannabis space in other markets.”

Englewood is also continuing its track record of successful dispensary projects in Pennsylvania with its latest jobs in the state for clients Green Thumb Industries (GTI) and Verano.

In Erie, Englewood completed a 16,756-square-foot Rise dispensary for GTI on Rotunda Drive. The project is designed by Arlington Heights, Ill.-based Greenberg Farrow.

For Verano, Englewood has completed a Zen Leaf dispensary in Altoona located on West Plank Road. The 4,811-square-foot project is the adaptation of an existing space. Chicago-based Collective Office Architects is the project architect.

“Not only is Pennsylvania a return market for us, but these jobs are both repeat business with clients we’ve now collaborated with on a number of projects,” said Di Santo. “As we continue to grow our work in the cannabis sector, we’re proud to say we are building long-standing relationships with many of the leading firms in this burgeoning industry.” 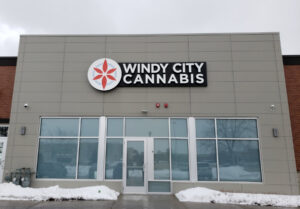