Earlier this week, Fifield Realty Corp. celebrated the topping off and the start of pre-leasing for The Sinclair Apartments, the developer’s new 35-story, 390-unit luxury rental tower in Chicago’s Gold Coast neighborhood.

With first move-ins scheduled for August 2017, The Sinclair will offer studio, one-, two- and three-bedroom residences, along with four-bedroom penthouses, ranging from approximately 500 to 2,600-plus square feet. Monthly rents will range from $1,900 for a studio to $13,870 for a four-bedroom penthouse. Adjacent to the building at its ground level will be a new 58,000-square-foot flagship Jewel-Osco, which residents will be able to access via a sky bridge.

“There’s magic in the air,” said Randy Fifield, chairman of Fifield Realty Corp. as she addressed a crowd of city officials, business partners and future residents at The Sinclair’s topping-off event on Tuesday, March 28. Even a flash mob appeared to celebrate the building’s milestone. “The Sinclair is about luxury living in Chicago and we’ve made that easier.”

In her remarks to the crowd, Fifield honored the many women employed and retained by Fifield Realty Corp. to work on The Sinclair, highlighting the fact that few construction sites could claim such a high percentage of female leadership for a project. She spoke of women leaders acting as “custodians of wellness” for The Sinclair and the Gold Coast neighborhood, assuring that unit layouts, finishes, amenities, services and programming fit the needs of the residents and the community.

Agreeing with Fifield that The Sinclair will be an asset to the neighborhood was 2nd Ward Alderman Brian Hopkins. “The energy is positive here for a reason,” Hopkins told attendees. “Fifield Cos. once again gets it right. They did two things that I, as an elected official, always look for in a development proposal: they took something that was here already and made it better, and they took something brand new and ran with it.”

In reference to The Sinclair’s amenities, Fifield said “Outside there will be alfresco dining and a 35,000-square-foot deck, so we’re counting on a wedding or something really fabulous to happen up there.”

The Sinclair’s deck will also offer residents an outdoor pool, spa and sun terrace, cabanas, a fire pit, outdoor grilling kitchens with intimate seating areas, a dog run and views of Lake Michigan. Other building amenities include a state-of-the-art fitness club with a separate yoga studio and private physical therapy studio; screening room with surround sound; resident’s lounge with demonstration kitchen; business center and conference room with screening capability; coffee bar; bicycle kitchen; a 24-hour concierge; and a secured-access parking garage. Situated in the heart of the Gold Coast, The Sinclair is blocks from many popular Gold Coast dining, shopping, cultural and nightlife destinations, as well as parks, schools and the lake. The building is just steps away from the CTA’s Red Line Division station and bus stops, offering convenient transit access to all areas of the city.

Steve Fifield, chairman of Fifield Cos., paid special tribute during the topping-off event to the city, SCB, McHugh Construction, Fifield’s in-house construction team and his wife Randy, for completing a 35-story building in just 19 months.

“Randy working with SCB and Mick De Giulio has produced the best product we’ve ever built,” said Fifield. “And of course I think we picked the right neighborhood to do it in because I think people here will really appreciate it.”

For a limited time, The Sinclair is offering special pre-leasing pricing. The Sinclair leasing center is located at 1221 N. LaSalle St., #308 and showcases kitchen, bath and flooring finishes. It is open Monday through Friday from 9 a.m. to 6 p.m., Saturday from 10 a.m. to 5 p.m. and Sunday from noon to 5 p.m. For more information, call (312) 288-2683 to schedule an appointment or visit www.sinclairapts.com.

Fifield Cos. is one of the nation’s premier developers of urban office towers and luxury high-rise rental apartments. Established in 1977, Fifield has earned a reputation for creating superb living and office environments in some of the country’s most renowned locations, including Chicago, Ft. Lauderdale, Los Angeles, San Francisco, Washington DC, Las Vegas and Honolulu. Fifield has completed more than 70 projects in the United States worth more than $7 billion. For more information, visit www.fifieldco.com. 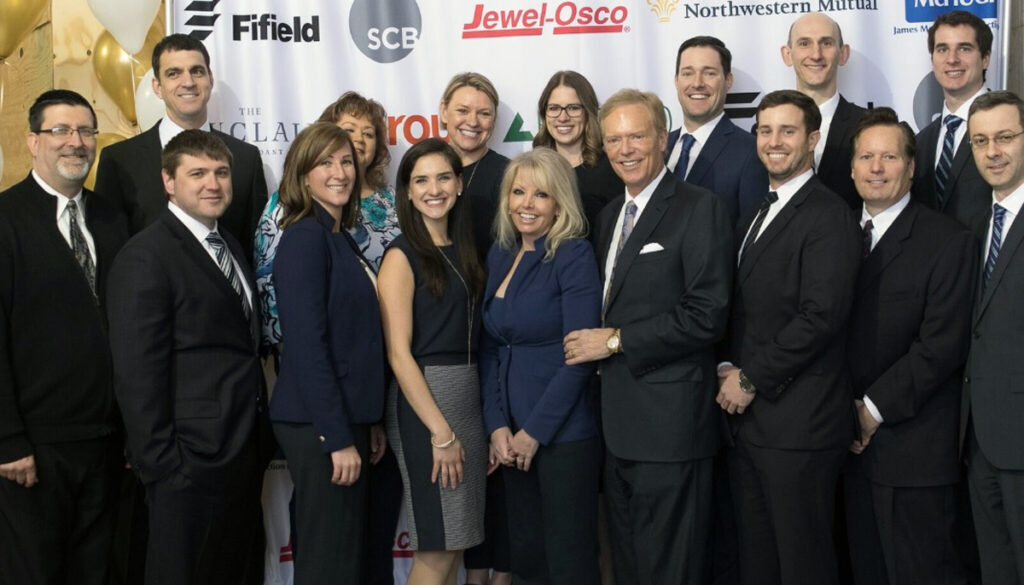 Steve and Randy Fifield, together with members of The Sinclair Apartments’ team, celebrate the topping-off of the 35-story, 390-unit luxury rental tower at 1201 N. LaSalle St., in Chicago’s Gold Coast neighborhood.