KTGY Architecture + Planning, an international award-winning architecture firm, today revealed details behind the design of Aperture Apartments, a 421-unit luxury rental building situated across from the Wiehle-Reston East Metro station in Reston, Va. Co-developed by The Bozzuto Group and Veatch Commercial Real Estate, the six-story, KTGY-designed community at 11410 Reston Station Blvd. is one of the first residential projects to open adjacent to the new Metro station, which is part of the ongoing $5.25 billion Dulles Corridor Metrorail project and Silver Line expansion.

“Aperture brings a snapshot of city living to this burgeoning suburb just outside Washington, D.C.,” said Rohit Anand, principal of KTGY. “Our goal was to create a façade that would fill a decades-old gap in the city’s architectural vernacular. We saw an opportunity to create a new identity in the area and designed Aperture as a complementary residential element to the adjacent mixed-use Metro station project.”

Working alongside the developers, KTGY planned Aperture as a dynamic, art-infused community. The KTGY studio leveraged its experience in forward-thinking multifamily design to create a community that blurs the line between city and suburban living by offering walkability in a lower-density setting with convenient access to transit as well as shopping, dining and entertainment.

One of Aperture’s most defining features is its central location in Reston Station, which is bounded by Wiehle Avenue on the east, Sunset Hills Road on the north, and the Dulles Toll Road on the south. Plans for this enclave of Reston include a 1.3 million-square-foot mixed-use development whose first phase opened in 2014, the same year as the Wiehle-Reston East Metro station. It will ultimately feature office buildings, restaurants, a pedestrian plaza, shops, residences and a full-service hotel.

Located just 20 miles west of Washington, D.C., adjacent to the 45-mile long Washington and Old Dominion Bike Trail and less than 2 miles east of Reston Town Center, the area around Reston Station served primarily industrial uses through the early 2000s and, before the Metro station opened, was dotted with low-rise commercial buildings. As such, the design and development team recognized the opportunity to create the architectural context for this enclave of Reston. KTGY programmed Aperture to include a contemporary façade with dark brick accented by light gray panels that add depth and dimension. Auburn-hued vertical columns frame the entryway as well as 5,000 square feet of street-level retail.

KTGY designed the entry of the building to be set back from Reston Station Boulevard and, in doing so, created an intimate plaza right at the doorstep of Aperture. The entry plaza was conceived to showcase a statement-making art installation that would help set the tone for the community and surrounding neighborhood. “Convergence,” a bronze and stainless steel sculpture by Reston native Zachary Oxman, was selected as the plaza’s centerpiece, drawing foot traffic from the adjacent rail station.

Also in line with maximizing the street-level experience, KTGY included an underground parking garage with 589 spaces.

“KTGY designed Aperture to complement this walkable, city-inspired district,” said Anand. “Despite the increased cost of excavation, we wanted to enhance the pedestrian experience. The underground parking garage allows for an aesthetically attractive street-level façade.”

Furthering the goals of the Reston master plan, which highlight art, nature and technology among the principles for development, and collaborating with a development team passionate about the arts and nature, KTGY designed Aperture as a community that would attract artists, makers and entrepreneurs. The firm programmed swaths of uninterrupted interior wall space that could be adorned with contemporary nature photography. Those works were selected from photos once featured in Nature’s Best Photography magazine, for which Charles Veatch, principal and president of Veatch Commercial Real Estate, serves as chairman of the board and editor-in-chief.

Careful planning also went into the naming of the building – one of the first residential communities to open in the Reston Station area – so it was important to design exterior features that reinforce the Aperture brand. KTGY accomplished that goal with the auburn-hued vertical accent columns, which draw the eye upward to the marquee-inspired signage atop the building.

“The elliptical staircase that anchors the lobby also functions as a connector between the first- and second-floor amenities,” said Anand. “It’s one of several examples of design that balances form with function.”

The Bozzuto Group is an experience-focused real estate company that is continually celebrated for its developments, customer service and workplace culture. With an expertise in homebuilding, multifamily development, construction and management for itself and its clients, Bozzuto is devoted to crafting extraordinary experiences. Founded in 1988, Bozzuto has developed, acquired and built more than 42,000 homes and apartments. Currently, it manages more than 65,000 apartments and 2.2 million square feet of retail space along the East Coast between Miami and Boston, in the Northeast and Chicago. With an annual volume of $500M, Bozzuto Construction is one of the largest general contractors in the Mid-Atlantic region. www.bozzuto.com. 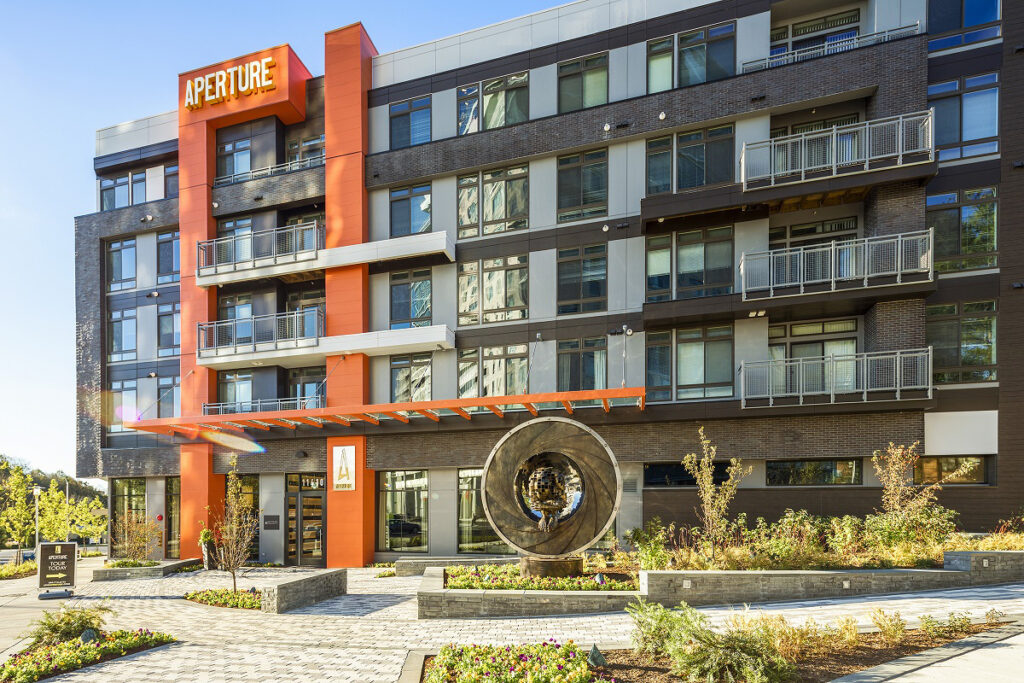 KTGY designed Aperture to fill a decades-old gap in the city’s architectural vernacular and create context for this emerging enclave of Reston, Va. 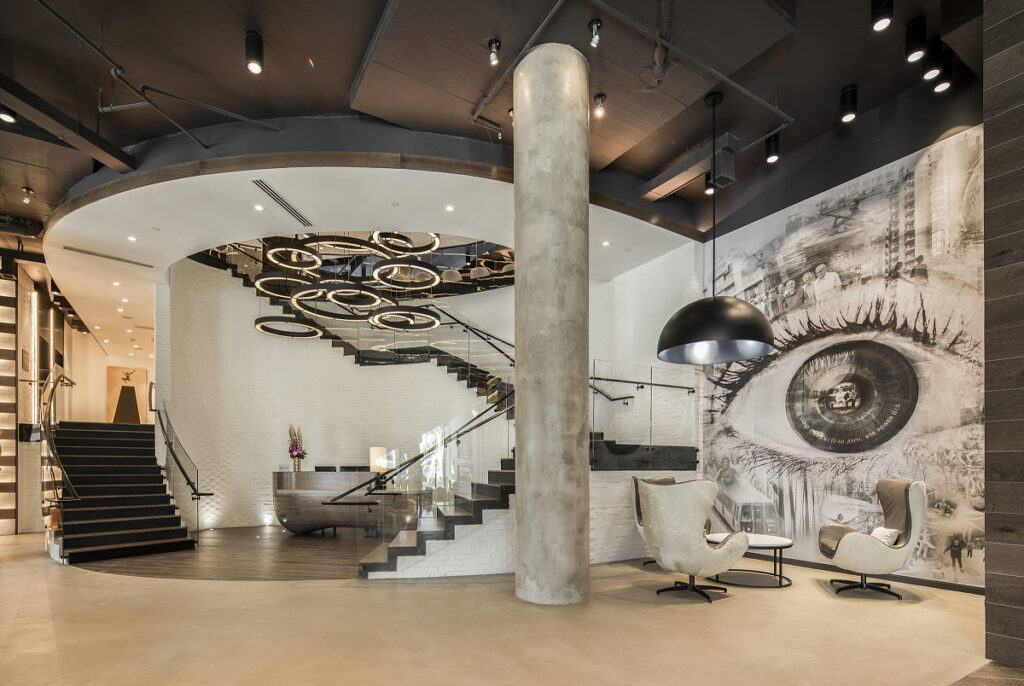 Recognizing the importance of having an intelligent flow between utilitarian, social and recreational amenity spaces at Aperture, KTGY programmed a double elliptical staircase in the lobby that connects the first floor to more than 32,000 square feet of amenities on the second level. 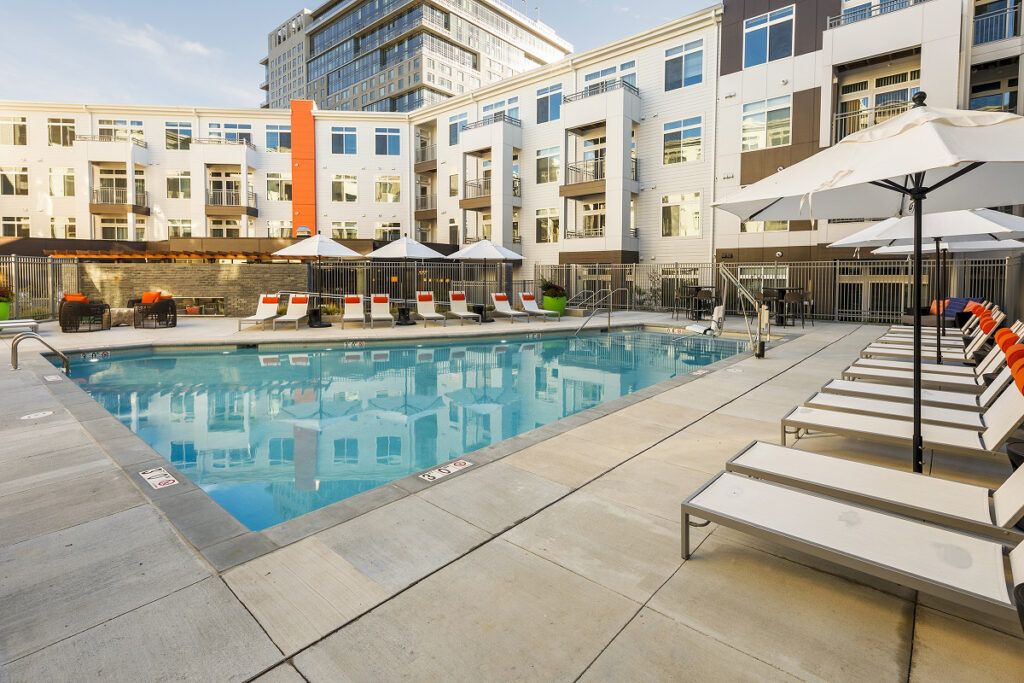