Lendlease (ASX: LLC), a leading global real estate group, has partnered with design consultancy PORT on a temporary art installation in Chicago’s South Loop. Entitled “River Frames,” the piece was commissioned as part of the 2021 Chicago Architecture Biennial, whose theme is “The Available City,” and can be viewed at Southbank Park, located within Lendlease’s 7-acre Southbank master plan along the South Branch of the Chicago River.

Accessible from the corner of Franklin and Harrison streets, the installation – one of 15 partner sites located in neighborhoods across Chicago – draws inspiration from the periods of use and vacancy that defined the riverfront parcel over the past 150 years, culminating in Lendlease’s development of Southbank, which began in 2015. Spanning nearly 2 acres, the park and its adjacent riverwalk were developed by Lendlease as amenities for Southbank residents and neighbors in the surrounding community.

“This installation helps underscore how the needs of the community can be addressed by reimagining and engaging with land that is otherwise sitting idle,” said Linda Kozloski, creative design director in the Chicago office of Lendlease. “When we took on the challenge to deliver a sustainable community to an area that had long lain fallow, we knew that a large, open space on the riverfront, available to all, would be a key component. PORT has helped us to celebrate that decision with this imaginative piece.”

Designed and installed by PORT, “River Frames” comprises five steel-frame enclosures whose simple shapes are derived from the utilitarian warehouse that formerly occupied a portion of the Southbank site. As visitors access the park via a gravel walkway, they pass a row of metal poles that trace where the warehouse’s eastern wall once stood and whose spacing harkens back to the frame of that and other commercial structures that previously lined the river.

At the terminus of the path, visitors are greeted by the five structures whose radial layout is intended to accentuate the shared space at the center, much like how Southbank Park serves as a central gathering area for the South Loop community. This intentional placement directly aligns with the theme of the 2021 Biennial, which seeks to explore the transformative possibilities for vacant urban spaces that are created with and for local residents.

“‘River Frames’ reflects on the past, collects us in the present and positions us towards the future,” said Andrew Moddrell, founding partner of PORT. “The central space created by the installation’s radial layout promotes the mission of this year’s Biennial, which is to generate new collective opportunities from Chicago’s available spaces. By tracing the journey of the site – from industrial hub to vacant land to developing community – visitors are invited to consider how the site’s layers of availability are revealed in these referential, yet whimsical, spaces.”

Running now through Dec. 18, the 2021 Biennial is led by Artistic Director David Brown, a designer, researcher and educator based at the School of Architecture at the University of Illinois at Chicago. “The Available City” is based on more than a decade of Brown’s research into Chicago’s approximately 10,000 vacant lots and the creation of an ongoing urban design proposal that connects community residents, architects and designers to work together to create spaces reflecting the needs of local neighborhoods.

Lendlease has been a Chicago Architecture Biennial sponsor since 2017. The firm’s Southbank development embodies its holistic commitment to creating the best places and promoting equitable, sustainable development that prioritizes urban regeneration.

Beginning in the late 1800s, the Southbank site housed a four-story Chicago Great Western Freight warehouse – part of the infrastructure that established Chicago as a major shipping and manufacturing hub. Featuring a simple, efficient design, the warehouse interfaced directly with river freight boats on the west side and cargo trains on the east, adjacent to Grand Central Station, which operated on the site between 1890 and 1969.

By the middle of the 20th century, river freight and warehousing declined in favor of interstate highway trucking, ultimately leading to the demolition of the warehouse and Grand Central Station in 1970. The site sat vacant for the next 40 years, despite its prominent location on the river and immediately south of the Loop.

Southbank Park serves as the heart of the Southbank master plan. Designed by Chicago-based landscape architecture firm Hoerr Schaudt, whose plan was implemented by Confluence, the publicly accessible green space features a central lawn and meandering paths that lead down to the adjacent waterway. Lendlease engaged the river with a fully programmed riverwalk that houses a viewing platform, seating areas and natural stone amphitheater created from lannon stone – uncovered during construction of the park – that originally served as the foundation of the Grand Central Station terminal. A kayak launch and water taxi stop are planned as part of subsequent phases.

Rooted in community, the park also features birdhouses created by design students through a partnership Lendlease established with the University of Illinois at Chicago, as well as a mural commissioned from local artist Ruben Aguirre. Located on the northern end of the park, adjacent to the Harrison Street Bridge, the mural draws inspiration from historical events such as the straightening of the Chicago River, as well as the natural landscape and history of the Southbank site.

Sustainability features in Southbank Park include an on-site stormwater management system designed to mitigate runoff. In restoring this stretch of the riverfront, Lendlease also created habitats that support native flora and fauna, honeybees and migratory birds.

Lendlease will host a family-oriented celebration of “River Frames” on Oct. 23 from 11:00 a.m. to 2:00 p.m. The event, which is free and open to the public, will feature a food truck as well as programming by ArchKIDecture – an independent architecture education project for children – and The Roof Crop, which operates a rooftop farm atop The Cooper.

Lendlease is a leading global real estate group with operations in Australia, Asia, Europe and the Americas. Our purpose is to create value through places where communities thrive.

Headquartered in Sydney, Australia, and listed on the Australian Securities Exchange, Lendlease has approximately 10,800 employees internationally.

Our core capabilities are reflected in our operating segments of Development, Construction and Investments. The combination of these three segments provides us with a sustainable competitive advantage and allows us to provide innovative integrated solutions for our customers. Our integrated approach means we harness the expertise in infrastructure, design, development, investments and management to deliver a project from conception to completion.

In the US, Lendlease Development brings over 60 years of global experience to bear in urbanization, communities and infrastructure development. Leveraging our placemaking expertise and integrated business model, we are committed to delivering transformational urbanization projects and investments in gateway cities that generate social, environmental and economic value. For more information, visit www.lendlease.com.

PORT is a Philadelphia and Chicago-based design consultancy comprised of architects, landscape architects, urban designers and planners. Formally established in late 2012 by Christopher Marcinkoski and Andrew Moddrell, PORT’s mandate as a practice is to imagine, design and implement strategies and spaces that serve to equitably and creatively enhance the public realms and built environments of the cities and landscapes in which we have the opportunity to work. 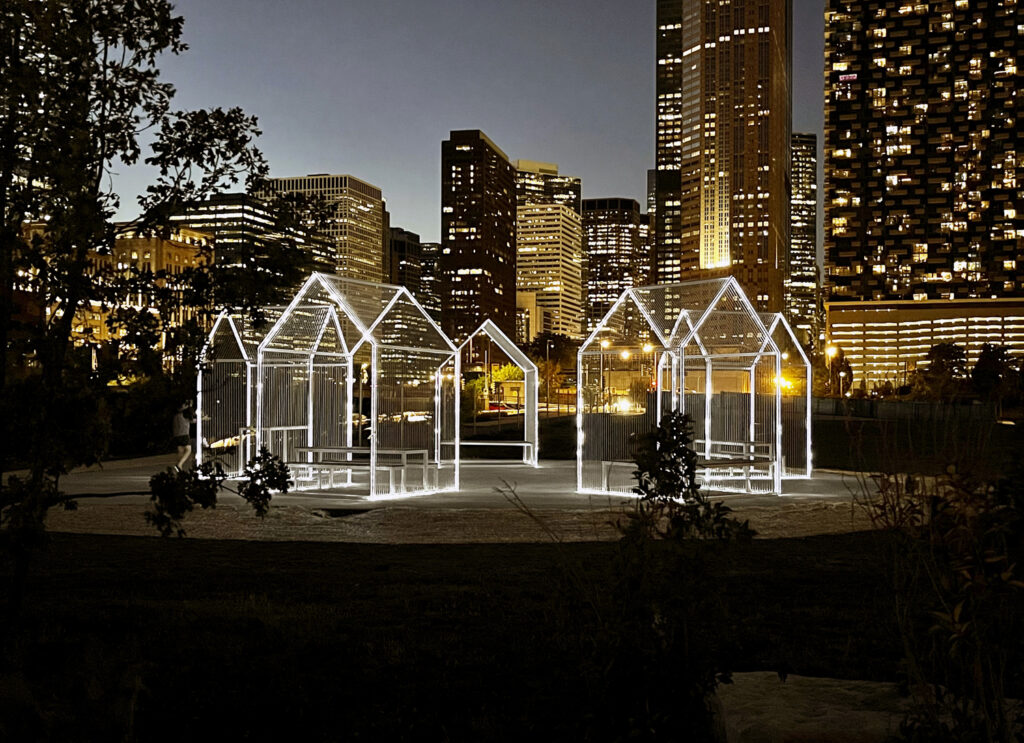 Located in Southbank Park in Chicago’s South Loop, the “River Frames” installation is a collaboration between Lendlease and PORT that is one of 15 partner sites for the 2021 Chicago Architecture Biennial. (Photo by Lauren McPhillips, Courtesy of PORT) 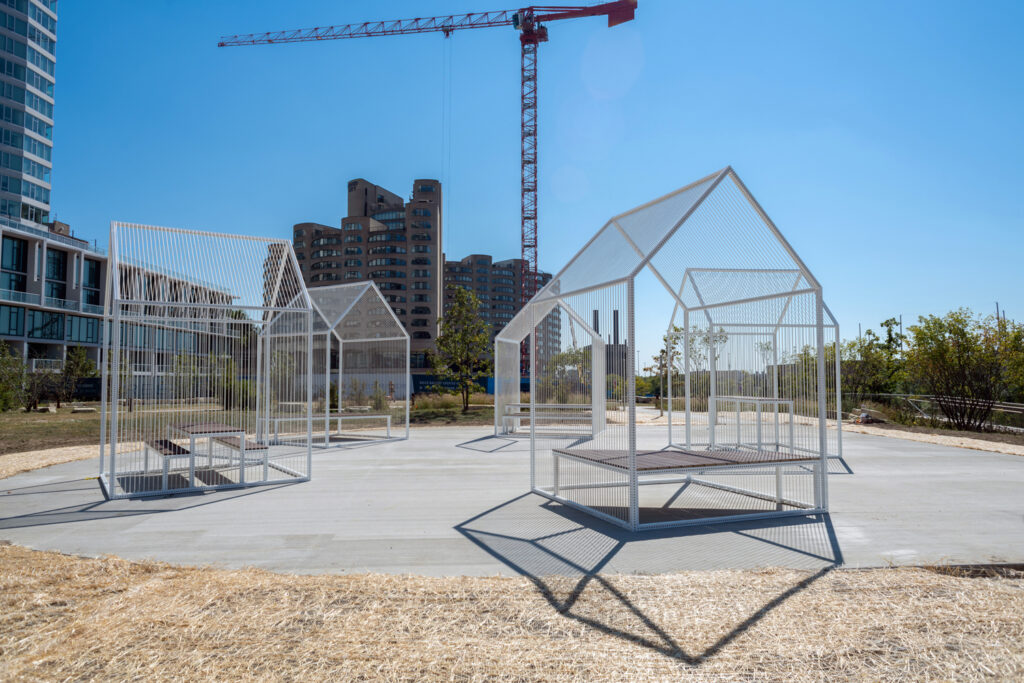 A collaboration between Lendlease and PORT for the 2021 Chicago Architecture Biennial, the “River Frames” installation is located in Southbank Park in Chicago. Developed by Lendlease, Southbank is also home to The Cooper, a 452-unit apartment tower, and The Reed, which recently broke ground and will deliver 216 condominiums and 224 apartments in 2023. (Photo by Lauren McPhillips, Courtesy of PORT)