Lendlease, a leading international property and infrastructure group, last week celebrated the grand opening of Southbank Park, a 2-acre publicly accessible green space with an adjacent riverwalk bordering the South Branch of the Chicago River. The park anchors the firm’s new 7-acre Southbank neighborhood development underway in the South Loop that, upon completion, will include several mixed-use towers, the first of which, The Cooper at Southbank, opened in fall 2018.

“Southbank Park embodies Lendlease’s holistic commitment to urban regeneration and community engagement in support of our broader mission of creating the best places,” said Ted Weldon, executive general manager for Lendlease Development in Chicago. “By introducing publicly accessible green space and a fully programmed riverwalk, we’ve reestablished connectivity – to the riverfront and between downtown and neighborhoods farther south. We’re proud to celebrate the completion of an amenity that both residents and visitors will enjoy for years to come.”

In addition to the official ribbon-cutting ceremony, Lendlease hosted an afternoon of activities for the community that included face painting, musical performances, magic acts and a live art exhibition.

Designed by Hoerr Schaudt Landscape Architecture, whose plan was implemented by Wolff Landscape Architecture, Southbank Park features lush landscaping and meandering walkways that lead down to a fully accessible riverwalk. This boardwalk is programmed with an amphitheater created from lannon stone – uncovered during construction of the park – from Chicago’s Grand Central Station, which operated on the site from 1890 to 1969. Other park amenities include bicycle racks, a central lawn and viewing platform showcasing the river and a skyline view that includes Willis Tower. A future kayak launch will open opposite the amphitheater, while the southern end of the site is expected to accommodate a water taxi stop.

“Southbank is a great example of a public-private partnership where Lendlease has designed, funded and constructed an iconic open space at the heart of the new Southbank neighborhood for its residents while also providing public open space and a critical extension of the Chicago Riverwalk into the heart of the South Loop,” said Ted Wolff, principal of Wolff Landscape Architecture. “It looks great, is inviting, and a wonderful asset for the community.”

“We’ve also taken great care to include a series of sustainability measures, such as an on-site stormwater management system as well as environments that support native flora and fauna, honeybees and both resident and migratory birds,” said Paul Turilli, Lendlease’s senior development manager for Southbank.

The park features six birdhouses created by students from the University of Illinois at Chicago. As part of an eight-week class, students designed and built birdhouses meant to attract bird species native to the riverfront landscape. A select group of birdhouse designs chosen by a committee of representatives from Lendlease Development, Wolff Landscape Architecture and Perkins and Will, which created the master plan for Southbank, were installed over the summer.

“The Southbank development is about the connections among the residences, the river and the green space,” said Perkins and Will Design Principal Todd Snapp. “Southbank Park is designed to bring the public and the tower residents to the riverfront. Eight years ago, nobody would go near the river. Now, people are kayaking on it.”

Also featured on the site is a mural designed by Ruben Aguirre, a graduate of Columbia College Chicago whose work has been exhibited in the National Museum of Mexican Art, Chicago Cultural Center and Hyde Park Art Center. In the Southbank mural, Aguirre pays homage to Chicago historical events such as the straightening of the Chicago River, as well as the natural landscape and history of the Southbank site. Aguirre is a Pilsen native and resident of the 25th Ward, where Southbank Park has been developed.

The riverwalk portion of the park was recently selected by Friends of Downtown as the 2019 recipient of the organization’s “Best Open Space” award.

Lendlease is a leading international property and infrastructure group with operations in Australia, Asia, Europe and the Americas. Our vision is to create the best places; places that inspire and enrich the lives of people around the world.

Headquartered in Sydney, Australia, and listed on the Australian Securities Exchange, Lendlease has approximately 13,000 employees internationally.

Our core capabilities are reflected in our operating segments of Development, Construction and Investments. The combination of these three segments provides us with a sustainable competitive advantage and allows us to provide innovative integrated solutions for our customers. 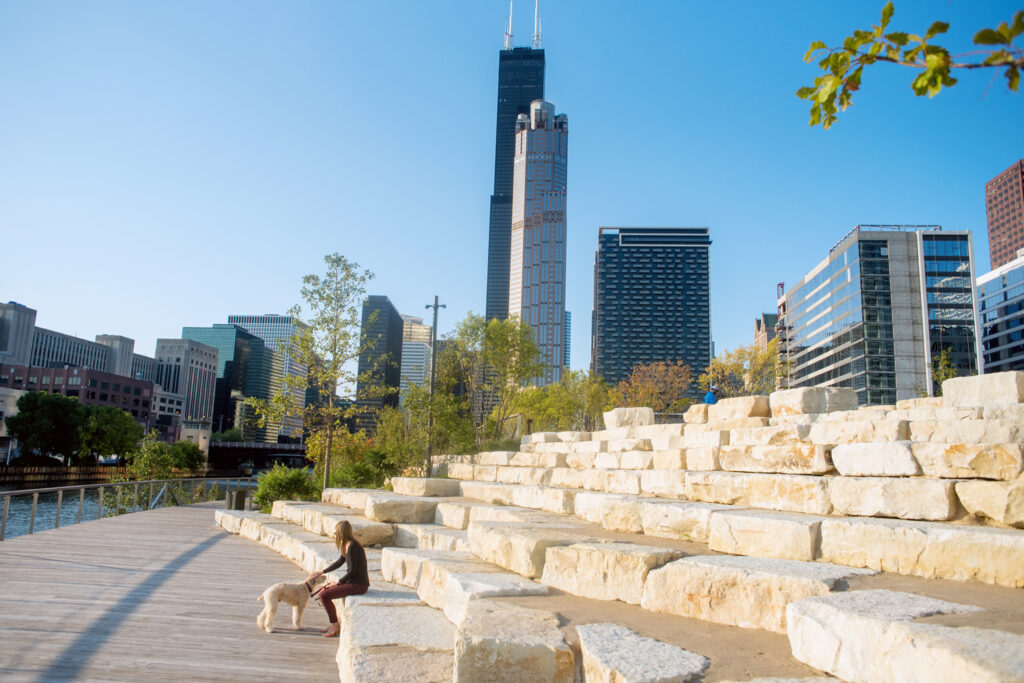 The Lendlease Development team last week cut the ribbon on Southbank Park, a 2-acre publicly accessible green space along the South Branch of the Chicago River.