“This project serves as a model of collaboration between public and private entities and nonprofit organizations to create a facility where world-class athletes can achieve their top performance,” said Andy Totten, project executive for McHugh Construction, a firm with a long history of building sports facilities, including Chicago’s United Center; Advocate Center, the Chicago Bulls’ practice facility; and Fifth Third Arena, the Chicago Blackhawks’ practice facility and community ice rink. “It’s also very rewarding to work on a state-of the-art project that is accessible not just to athletes training for the Olympics, but everyone in the community, regardless of age or experience. A facility like this can open up track and field to a whole new generation.”

The After School Matters area includes a dance and exercise studio, full culinary teaching kitchen, gathering/performance space, rooftop deck and garden, and multipurpose labs for art, music, science and technology. After School Matters participants and the community at large will also have access to new baseball fields and site walkways that surround the building.

While local athletes will use the building for practice and meets, its size and Olympic-grade quality qualifies the facility to bid to host NCAA Division I, II or III Track and Field Championship competitions, which would draw athletes from around the country.

The facility’s main attraction, an oval track, can be banked to eliminate the centrifugal force that makes athletes lean one way or the other, allowing them to achieve their top speed. The track’s interior lane rests on a pivot and the support system underneath rests on hydraulic cylinders that are part of an actuator system that makes it possible to bank the track for a race.

“This is only the 12th indoor hydraulically banked track of its kind in the U.S., so it was crucial to use the best trade partners to build the track system, which features a complicated series of jacks and pumps within pits at both ends of the track, and all supporting construction such as the superflat concrete floors,” Totten said. “The ability to build sports structures with incredibly tight tolerances for optimum athletic performance is definitely a hallmark of McHugh. We are equally proud that we were able to complete this work on schedule through the COVID-19 pandemic, all while providing opportunities for inclusive participation at the general contracting, subcontracting and field labor levels.”

Developed, fabricated and installed by Mondo and Kiefer USA, the Gately Park track system has six preset banking angles, depending on the length of race. Supervisors from the manufacturer’s factory in Italy monitored the installation and commissioned the system to ensure it received the World Athletics certification that allows for record times run on the track to stand.

When the track is not in use, all lanes lay flat so the space can be used for additional recreation. To ensure other sports would not affect the conditions of the track or field, McHugh/Bowa installed basketball and volleyball stanchions that swing down from the ceiling to eliminate inserts in the floor surface. The building also features a column-free design as to not interfere with track and field events, which meant the fieldhouse roof was constructed with six massive, 252-foot-by-20-foot-deep barrel-vaulted roof trusses that span the entire width of the space, with each truss weighing 120 tons. This added logistical challenges requiring the cranes erecting the trusses to be carefully placed inside the facility and the roof to be constructed in advance of the seating structure below.

“We are extremely proud of this project and our ability to add value at several points,” said Bowa Construction President and CEO Nosa Ehimwenman, who was an All-American student athlete in track and field while attending Ohio State University, where he achieved Olympic ‘B’ qualification and won the Big Ten Championship in the triple jump. “Track and field helped me become who I am today and helped foster the competitor and leader within me, so this facility is very special to me.”

Designed by Itasca, Ill.-based Williams Architects, the building’s exterior harkens back to the classic structures in the surrounding Pullman neighborhood while incorporating modern touches. The facade consists of a combination of aluminum and glass curtainwall, brick-clad architectural precast concrete, traditional masonry veneer and metal panels.

McHugh/Bowa employed more than 40 different subcontractors and vendors and more than 1,000 construction professionals for the project, which achieved over 40% MBE participation, over 9% WBE participation and had over 430 minority tradespeople.

Since its founding in 1897, James McHugh Construction Co. has earned its reputation as a builder of landmark, one-of-a-kind structures in Chicago and across the Midwest. While best known for building some of Chicago’s most iconic structures such as St. Regis Chicago (Vista Tower), Aqua Tower, NEMA Chicago, Marina City, and Navy Pier’s Centennial Wheel and Sable Hotel, McHugh is equally passionate about delivering impactful projects that deliver more equitable access to community services while providing diverse and inclusive opportunities for contracting partners and field labor alike. The company’s mission has always been to promote a seamless and positive project experience with excellence and innovation. It is known for its unwavering commitment to its clients, its ability to deliver exceptional results on time and within budget, and its dedication to growing and developing its partnerships with subcontractors. For more information on the company, visit www.mchughconstruction.com.

Incorporated in 2009, and organized in 2012, Bowa Construction is a general contracting and construction management firm that is best known for their work on several high-profile projects that were recognized as industry “firsts” in Chicago. Their knowledge lies within key sectors such as aviation, athletics, healthcare, K-12, multifamily and mission critical. Their mission is to continue to deliver projects that will positively impact the community. The company’s foundation is built on the core principles of integrity, innovation, teamwork, and excellence. Bowa is headquartered in Chicago and has regional offices in Washington, DC; Champaign, Ill.; Columbus, Ohio; and Syracuse, NY. Collectively, the organization has expertise in the key areas of preconstruction, operations, and community engagement. Visit www.bowaconstruction.com for more information about the company. 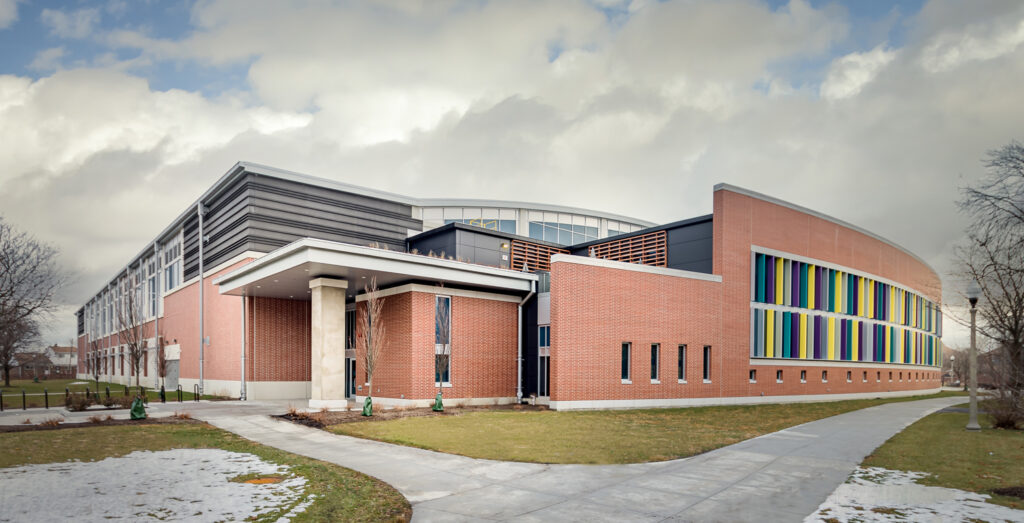 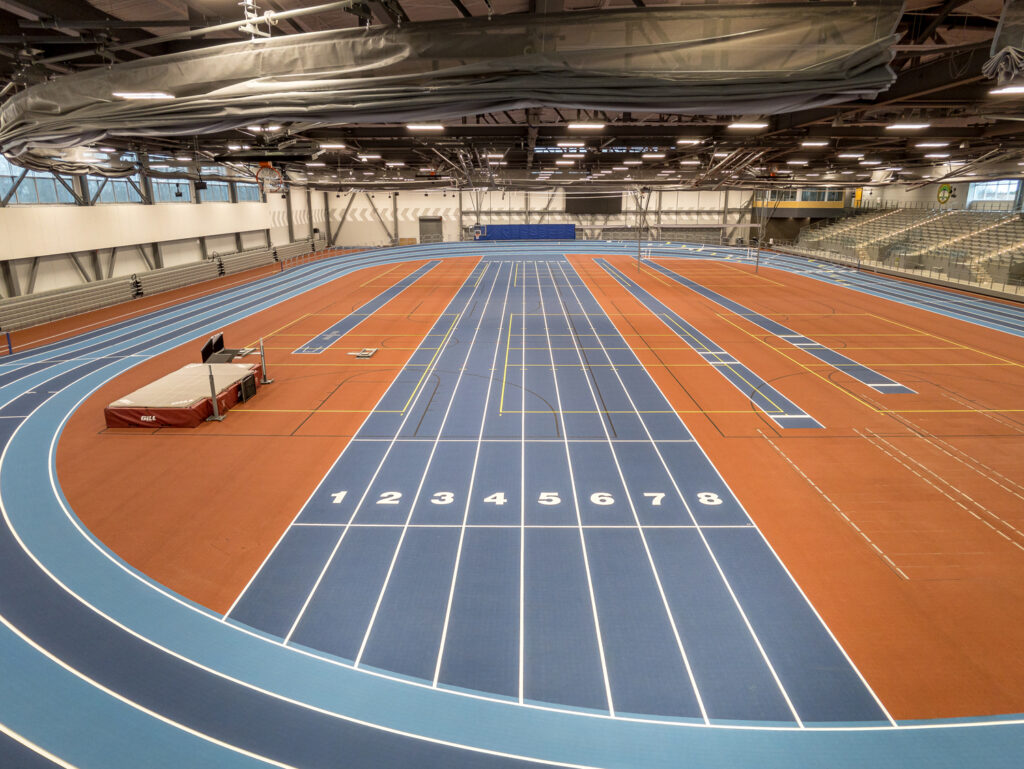 Gately Park Track Interior: Inside the oval track are eight sprint lanes; high jump and long jump pits, and a pole vault area. Basketball and volleyball stanchions swing down from the ceiling to adapt the space for other sports. 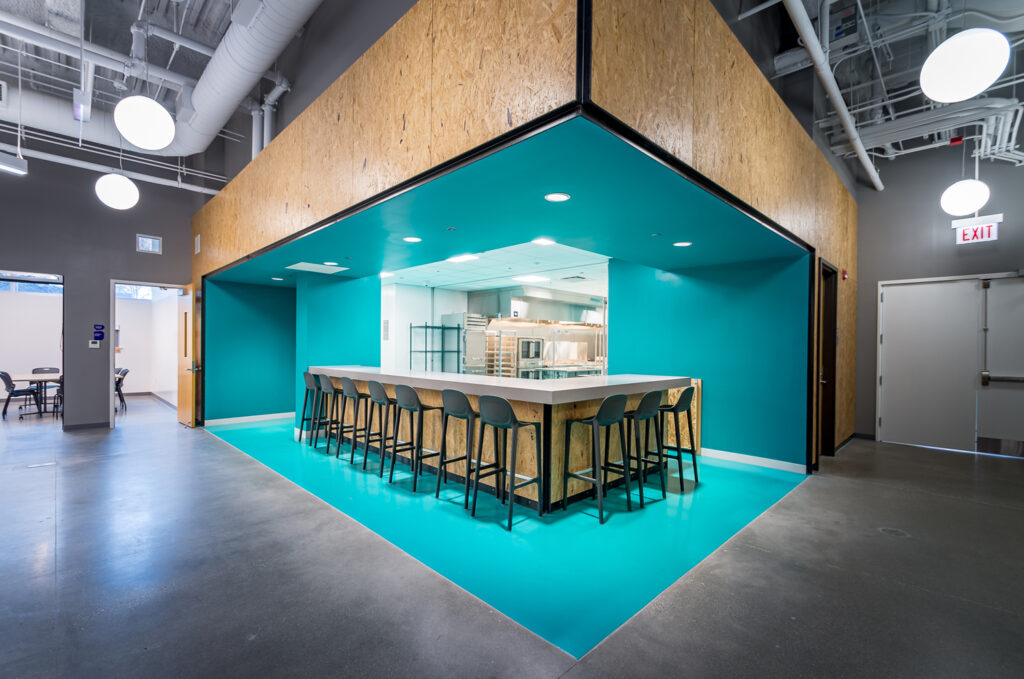 Gately Park Kitchen: A culinary teaching kitchen at the new Indoor Track & Field Facility at Gately Park is part of the After School Matters space, which also includes a dance and exercise studio, performance rooms, a rooftop deck and garden, and multipurpose labs for art, music, science, and technology.