James McHugh Construction Co., one of the country’s largest commercial contractors with a concentration in high-end hospitality, along with its joint venture partner Powers & Sons Construction Co., a minority-owned Midwestern general contracting firm, announce they have completed the $100 million construction of Sable at Navy Pier, a 223-room, seven-story hotel at one of Chicago’s top tourist attractions. Part of Hilton’s Curio Collection, the ACRON USA-owned hotel opens March 18, 2021, and is the first Chicago hotel to be built “on top” of Lake Michigan.

“A project like this comes around once in a lifetime, and it’s the exact type of complex construction – from building over water to working around Navy Pier’s 9 million annual visitors – that we excel at and like to execute,” said John Sheridan, executive vice president of McHugh Construction. “McHugh has been building at Navy Pier since 2014, so we knew the space constraints, the safety concerns of building near millions of visitors and existing operations, and the engineering gymnastics required to ensure the structural integrity of the historic pier. We are proud to have partnered with Powers & Sons on Sable at Navy Pier as well as Offshore — their involvement was instrumental in the overall success of both projects.”

“The McHugh/Powers & Sons joint venture was a winning combo, and the end result shows we definitely chose the right partners for not only the construction of this magnificent hotel, but also the awesome rooftop bar Offshore in this extraordinary place. We are beyond excited to offer this new and unique hotel to the residents and visitors of Chicago,” said Greg W. Wilson, president and CEO of ACRON USA.

The 201,124-square-foot Sable at Navy Pier is located on Navy Pier’s South Dock, a 2,000-foot-long pedestrian promenade near the pier’s east end. The hotel is more than 800-feet long, and every room offers one-of-a-kind waterfront views of Chicago’s beautiful skyline. Construction involved integrating the new building into the pier’s existing structure, including saving its 25-year-old curtainwall window front, while also building five new floors of guest rooms and seamlessly tying into the existing Festival Hall.

Building new on the century-old pier

McHugh/Powers used the design/build method for select trades including mechanical, electrical, plumbing, fire protection and structural cold-formed steel framing on the project, collaborating with those trades well before construction began. This approach allowed design and construction to proceed in a more seamless fashion while these partners were able to procure long-lead materials to support the overall project schedule.

But before building up, McHugh/Powers oversaw installation of 51 new rock-socketed micropiles to support the south half of the hotel. In lieu of large caissons, these high-capacity, small-diameter piles were driven through the 1960s’ South Dock and Lake Michigan before they were ultimately secured in two feet of bedrock. At a load-bearing capacity of 530,000 pounds per pile, these are some of the largest micropiles ever approved for use in Chicago.

Many of the construction challenges the team overcame in completing Sable involved structural and logistical constraints of the pier and connecting the hotel into the existing buildings. For example, the new building was designed with a long-span steel podium that limited the number of new foundation locations, but necessitated the installation of many large steel columns and beams, including a 58-foot long, 22-ton beam. This required McHugh/Powers to set up a 350-ton, all-terrain crane at the south side of the pier, as well as 92 unique-engineered crane mats to adequately spread the load on the existing structure. Due to the size of the crane, McHugh/Powers worked a second shift during the overnight hours as to not disrupt Navy Pier’s daily operations and events.

In an effort to reduce the amount of weight on the historic pier, McHugh/Powers worked with the design team and its specialty subcontractor partner, Denk & Roche, to design and install a light-gauge, cold-formed steel bearing wall and floor joist structure to frame the hotel’s upper five levels.

To seamlessly connect the new hotel into existing pier buildings, the construction teams reinforced or replaced existing columns and bracing of the existing Festival Hall structure at 16 different locations. Additionally, McHugh/Powers needed to demolish and rebuild the original 1900s’ pier cap in order to add the new hotel elevator pits. These pits, as well as some existing access holes to Lake Michigan, needed to be waterproofed to protect the structure from rising lake levels.

And to navigate one of the project’s more unusual unforeseen challenges, McHugh/Powers worked with the Army Corps of Engineers and CDOT Harbor to coordinate the hotel’s construction timeline around the migration of the mudpuppies that reside under the pier during the winter months. These small aquatic salamanders are a protected species in Illinois that live in shallow water and are tracked by researchers to monitor Lake Michigan’s ecosystem.

“Whether it’s working overnight shifts, or safeguarding animals, we’re always prepared for the unexpected – especially when you’re working in a public space,” said Sheridan. “Due to our experience in hotel construction and renovation, plus our previous work at Navy Pier, we’ve mastered the art of ensuring complex construction activities don’t impact a business’ day-to-day operations – we know the importance of keeping operations and events running smoothly,”

Construction of the hotel began in June 2018 and was completed by October 2020, but the opening of the hotel was pushed to 2021, as Navy Pier closed last fall due to the pandemic. Also re-opening this spring adjacent to the hotel will be Offshore, the world’s largest rooftop bar (as certified by the Guinness Book of World Records) that sits on top of Navy Pier’s Shelter building. McHugh/Powers completed construction of Offshore in May 2019.

“The opening of Sable at Navy Pier is the perfect bookend to the work we did on Offshore and creates an exciting new chapter for this civic space that is a beacon to so many Chicagoans and tourists alike,” said Sheridan. “It’s been a privilege to be part of the pier’s story and to once again partner with operator Maverick Hotels & Restaurants, a company we worked with in 2018 to complete the tri-branded Hilton at McCormick Place.”

KOO LLC was the project architect and completed the interiors for both Sable at Navy Pier and Offshore, and Thornton Tomasetti served as the structural engineer for both projects.

Since its founding in 1897, James McHugh Construction Co. has earned its reputation as a builder of landmark, one-of-a-kind structures in Chicago and other areas of the country. The company specializes in managing multimillion-dollar projects, from ground-up new construction to complex renovations and high-end interiors. As a multi-faceted general contractor, McHugh constructs high-rise concrete towers; steel structures; and buildings using alternative materials such as cold-formed steel, heavy timber and cross-laminated timber. McHugh has built and renovated iconic structures such as Chicago’s Marina City, Vista Tower, Trump Tower, Aqua Tower, Blackstone Hotel, Navy Pier (including the 200-foot-tall Centennial Wheel and most recently, the Sable Hotel at Navy Pier, Curio Collection by Hilton, and the Offshore Rooftop and Bar), as well as other noteworthy projects in regional markets such as Loring Park Tower in Minneapolis, Two Twelve Clayton and Westin Cupples Station in the St. Louis area, and multiple projects in Nashville and Miami. The company’s mission has always been to promote a seamless and positive project experience with excellence and innovation. It is known for its unwavering commitment to its clients, its ability to deliver exceptional results on time and within budget, and its dedication to growing and developing its partnerships with subcontractors. For more information on the company, visit www.mchughconstruction.com. 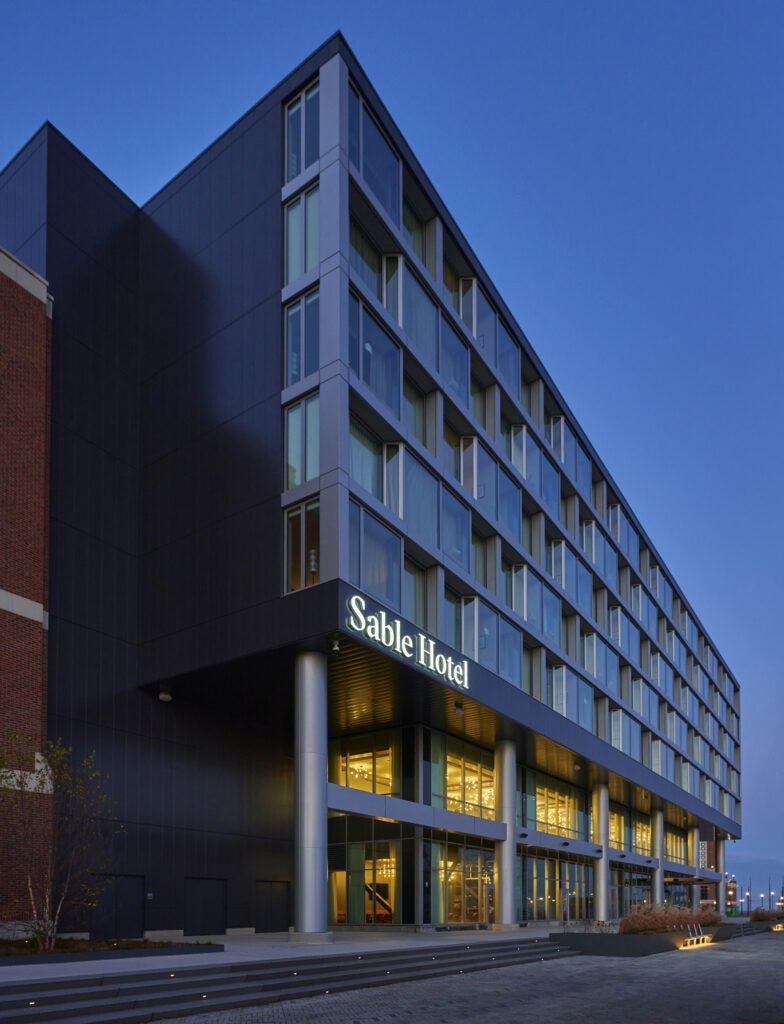 The McHugh/Powers joint venture has completed the $100 million construction of Sable at Navy Pier, a 223-room, seven-story hotel at one of Chicago’s top tourist attractions.

Construction of Sable at Navy Pier involved integrating the new building into the pier’s existing structure, including saving its 25-year-old curtainwall window front, while also building five new floors of guest rooms and seamlessly tying into the existing Festival Hall. 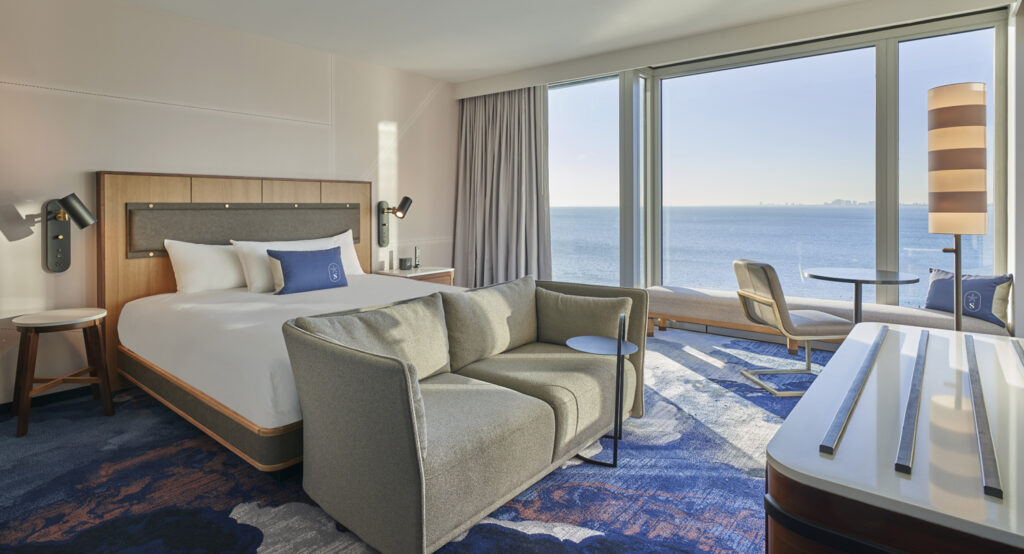 Part of Hilton’s Curio Collection, the ACRON USA-owned Sable at Navy Pier hotel opens March 18, 2021 and is the first Chicago hotel to be built “on top” of Lake Michigan. Interiors are by KOO LLC.