McHugh Construction, one of the country’s largest commercial contractors, announces it has begun the highly anticipated historic renovation of Chicago’s Ramova Theater, a 36,000-square-foot project that includes restoring the theater and building out adjacent space for a new brewery and restaurant at 3510-3520 S. Halsted St. Originally built in 1929, the Ramova Theater has been vacant since 1985. In August, McHugh began selective demolition and investigation of existing conditions in the building, which will once again be a community anchor for the Bridgeport neighborhood following completion of construction in late 2022.

“We’re honored that the public-private partnership of the city of Chicago and co-developers Our Revival Chicago and Baum Revision have entrusted us to restore and reconstruct this historic theater to its former glory,” said Andy Totten, McHugh Construction vice president and project executive. “The development will attract cultural enthusiasts near and far. We will lean on our extensive experience in historic renovations and skilled craftspeople to create a venue that will honor the past and boost the economic future of the Bridgeport community and the South Side.”

Upon completion, the 22,200-square-foot Ramova Theater will include a 1,600-seat auditorium at ground level and a separate balcony-level theater that can accommodate 200 people. In addition to bringing in big-name bands for the public at large, the venue will also host events for local schools and community groups.

“McHugh Construction has been a valuable partner in our concept for this project since its inception,” said Tyler Nevius, owner of Our Revival Chicago. “It’s incredibly rewarding to have our plans approved by the City Council and see McHugh executing our vision for the site. We’re privileged to have the best restoration teams in Chicago dedicated to this one-of-a-kind revitalization project.”

Adjacent to the theater, a separate entrance will lead patrons to a new 4,000-square-foot brewery and tap room fronting Halsted Street. Brewery operations will extend into the basement that will be within view of the dining and bar area. A 200-person space on the second floor above the brewery and taproom will host private events and intimate musical performances.

The project will also feature the revived 800-square-foot, 30-seat Ramova Grill restaurant at 3510 S. Halsted St. The eatery will be run by award-winning The Duck Inn chef and owner Kevin Hickey, a Bridgeport native who used to frequent the Ramova Grill as a child. The original restaurant closed in 2012.

“We will be restoring numerous architectural details in adherence to National Landmark restoration guidelines,” Totten said. “Working closely with Baum Revision and the design team’s historic preservation specialists, we will revive the historic features of the building while reinforcing the structure’s infrastructure and bringing the building up to code.”

Some of those details include bringing back to life the theater’s existing marquis; the lobby and auditorium to its original Spanish courtyard style; the theater’s plaster ceiling and other decorative plaster elements throughout; the vintage ticket booth; and the interior’s faux-marble and gilded plasterwork.

McHugh is leveraging lessons learned in past historic renovation projects as it works with the project team to conceal state-of-the-art systems within the early 20th century fabric of the theater building. As in past historic theater renovations, designing the project to utilize the historic air distribution and mechanical chases is necessary to maintain the integrity of the historic assembly spaces. In similar fashion, it will be necessary to conceal fire protection/alarm systems in the historic spaces within the decorative plaster ceilings without disrupting the historic character of the spaces.

McHugh and its subcontractor team will be restoring the historic brick and terracotta façade along the east face of the building at Halsted Street that houses the brewery and restaurant. Further, McHugh’s in-house structural engineering team, McHugh Engineering Group, is serving as the project’s structural engineer of record, allowing the team to tap into its collective experience working on structural modifications and additions to historic and complicated structures.

Designed by Chicago-based O’Riley Office, the city-owned theater and adjoining parking lot will receive Tax Increment Financing (TIF) funds, with an eye toward spurring growth in the area and kick-starting a revitalization of the Halsted corridor surrounding the property. The parking lot across the street from the Ramova Theater will have venue parking and can be used for community events such as farmers’ markets. The open area immediately adjacent to the south side of the theater will be reimagined as a new outdoor beer garden.

The project will create 80 permanent and approximately 110 temporary construction jobs. Through McHugh’s experience on public-private projects throughout the city, including the recently completed Indoor Track & Field Center at Gately Park, as well as its work at Ogden Commons near Douglas Park and 508 Pershing at Oakwood Shores in Bronzeville, Totten said the firm has the experience and strategies to ensure this renovation is a success for all parties.

Since its founding in 1897, James McHugh Construction Co. has earned its reputation as a builder of landmark, one-of-a-kind structures in Chicago and across the Midwest. While best known for building some of Chicago’s most iconic structures such as St. Regis Chicago (Vista Tower), Aqua Tower, NEMA Chicago, Marina City, and Navy Pier’s Centennial Wheel and Sable Hotel, McHugh is equally passionate about delivering impactful projects that deliver more equitable access to community services while providing diverse and inclusive opportunities for contracting partners and field labor alike. The Ramova Theater project continues the firm’s tradition of servicing the hospitality and entertainment markets, leveraging lessons learned from projects such as The Lyric Opera House, the new Goodman Theater, Navy Pier, and the United Center. The company’s mission has always been to promote a seamless and positive project experience with excellence and innovation. It is known for its unwavering commitment to its clients, its ability to deliver exceptional results on time and within budget, and its dedication to growing and developing its partnerships with subcontractors. For more information on the company, visit www.mchughconstruction.com. 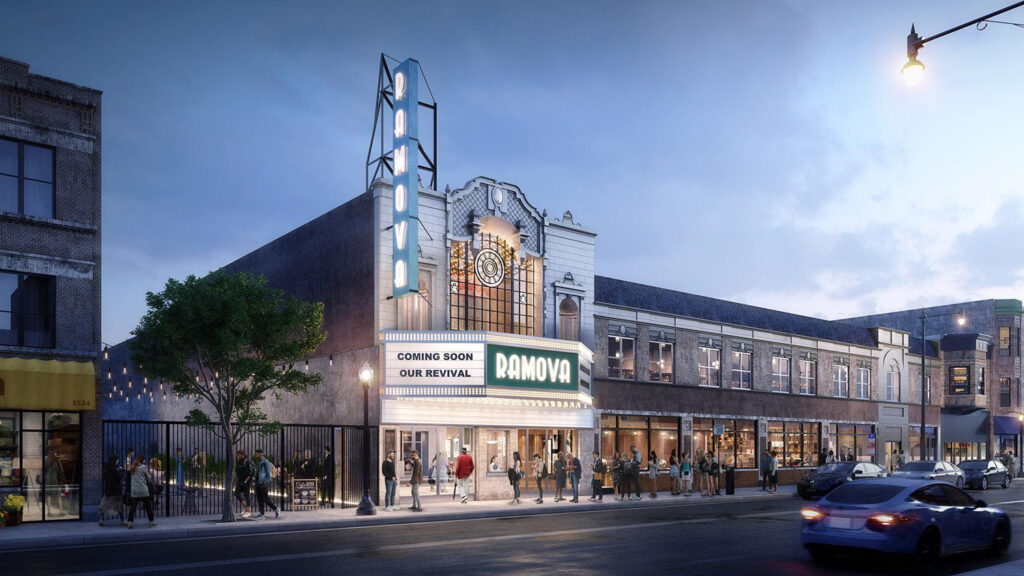 McHugh Construction has begun the restoration of Ramova Theater and the construction of a new brewery and restaurant at 3510-3520 S. Halsted St. in Chicago’s Bridgeport neighborhood. 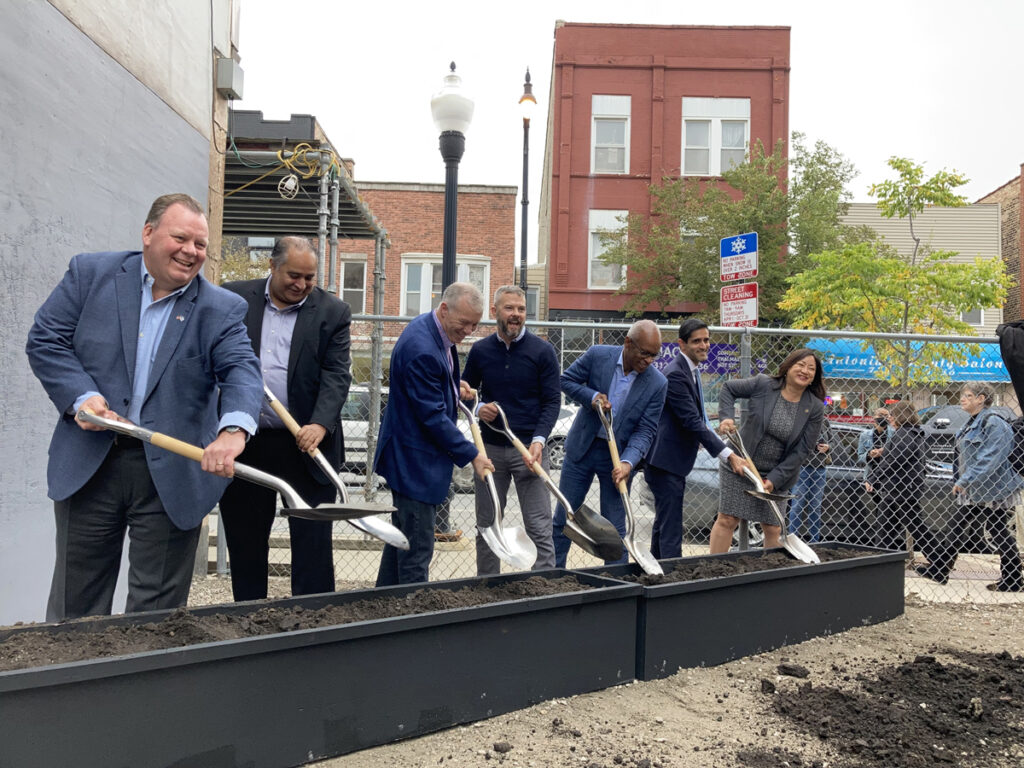 Together with city of Chicago and Cook County officials, Developer Tyler Nevius (center in blue sweater) celebrates McHugh Construction starting the restoration of the historic Ramova Theater and the construction of a new brewery and grill at 3510-3520 S. Halsted St. in Chicago’s Bridgeport Neighborhood. 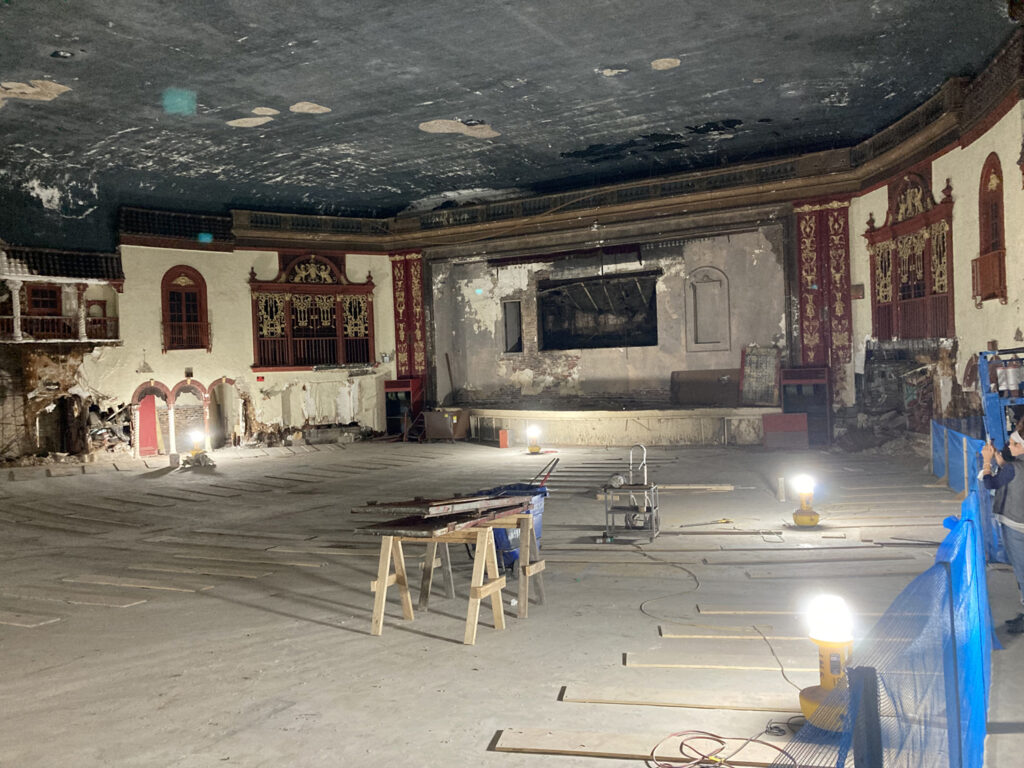 McHugh Construction will restore and reconstruct the historic Ramova Theater, which will include a 1,600-seat auditorium and a separate balcony-level theater that can accommodate 200 people. 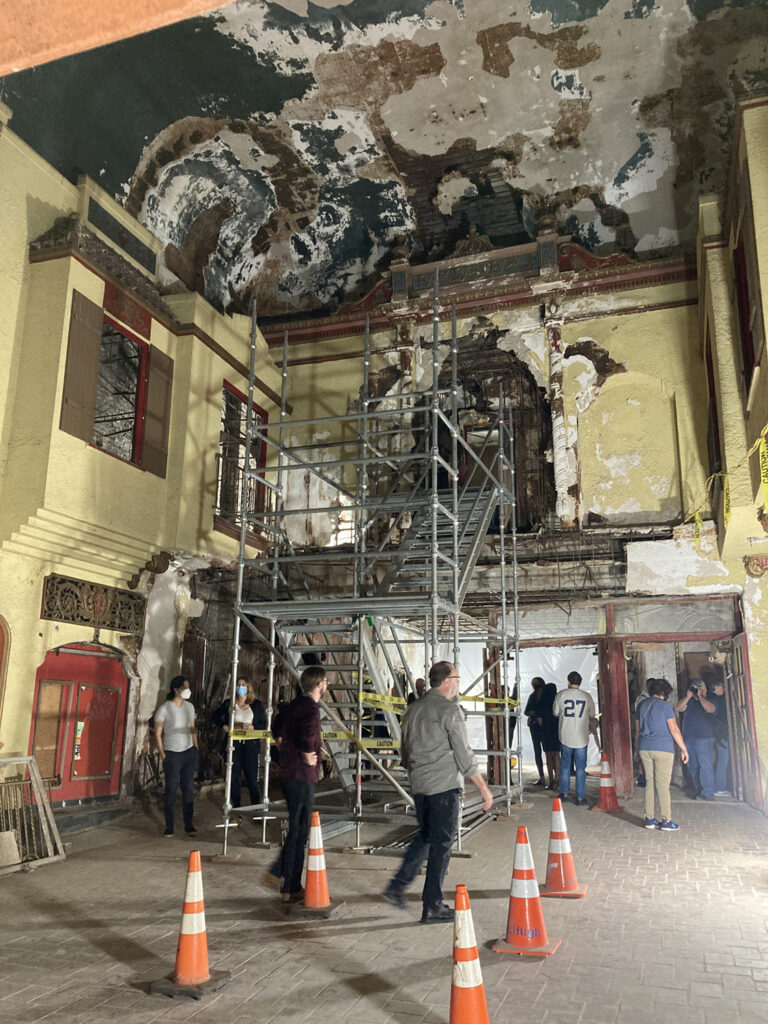 The lobby and auditorium will be restored by McHugh Construction to its original Spanish courtyard style.