“Ryan’s financial commitment to improving facilities and opportunities for residents has advanced real change in Markham, a diverse and underserved community,” said Eric Abrams, Ryan Companies’ director of construction. “Markham city officials pointed us to their biggest needs – new parks, a reconfigured fire station and infrastructure improvements – and we got to work to deliver those items and make a positive, lasting impact in the community.”

The first community service effort began in late 2020 when Ryan retrofitted about 50 light poles along 159th Street to accommodate holiday lighting, transforming a major thoroughfare into a festive centerpiece of the neighborhood.

“It has always been on our to-do list to get this done, and God brought you guys into our lives to make the job get done quickly,” said Markham Park Board President LaKeya Webb at the parks’ grand opening celebration earlier this fall. “I am excited to have parks that our children and families can come out to play in and enjoy and have fun.”

Ryan also completed the renovation of Fire Station #3 at 16300 Dixie Highway, Markham. Previously, the fitness room was on the second floor, above bedrooms. Ryan switched the layout, adding six bedrooms on the second level and building a new weight room on the ground level. Now, when firefighters exercise and drop weights on the floor, they won’t wake up their fellow workers.

The community service work in Markham, where an estimated 19% of the population have an income below the poverty level, is one of the biggest stewardship efforts Ryan has completed. The firm will continue to look for opportunities to meet needs in the communities where it is active as a developer and/or general contractor, according to Abrams.

Companywide, Ryan’s corporate giving leverages financial resources and volunteer time to invest 5% of its pre-tax earnings back into the communities where they work annually. As part of the firm’s focus on stewardship, employees are encouraged to use up to 20 hours of work time each year to volunteer in the communities where Ryan works.

Founded in 1938, Ryan Companies offers comprehensive commercial real estate services as a national developer, architect, capital investment consultant, builder and real estate manager with a focus on bringing lasting value to its customers and the communities in which it works. Ryan’s market depth includes retail, industrial, healthcare, multifamily housing and senior living. Ryan’s development and corporate build-to-suit work spans a wide range of product types including office, mixed-use, hospitality and mission critical facilities. Ryan has over 1,800 employees in 16 offices and has completed projects in nearly every state. For more information, visit ryancompanies.com. 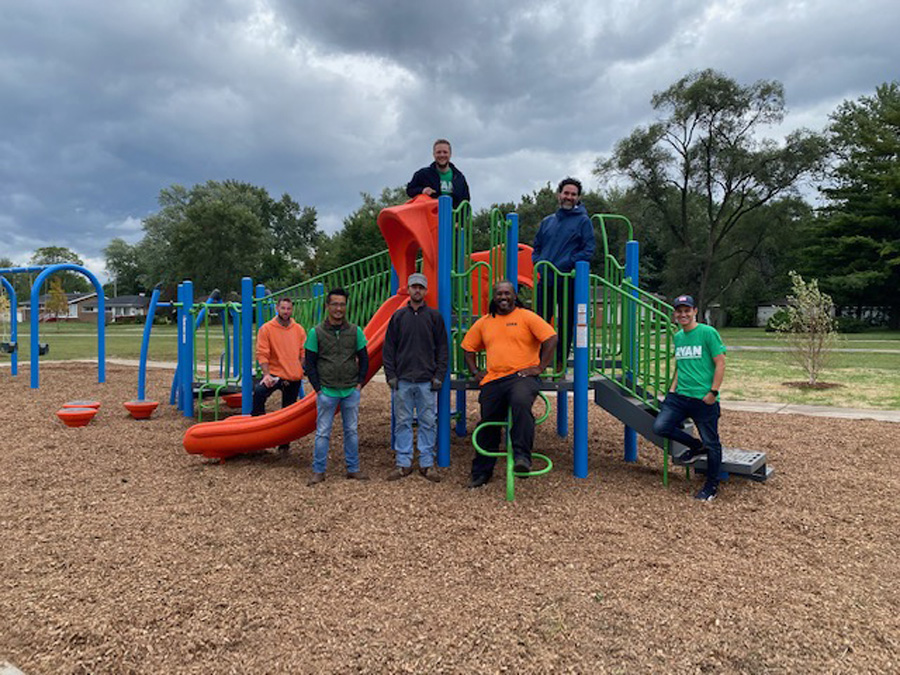 Before and After_Playground: In Markham, Ill., Ryan Companies gave back to the community where they built an Amazon Fulfillment Center by installing two new neighborhood playgrounds.

Before and After_Baseball: Following its construction of a massive Amazon Fulfillment Center in Markham, Ill., Ryan Companies donated labor and materials to build new baseball fields and complete numerous other park upgrades.