Waterton Associates LLC, a U.S. real estate investor and operator, has entered the Houston market with its acquisition of the Villas at Hermann Park, a 320-unit wrap-style rental community adjacent to Hermann Park and the Texas Medical Center, whose 54 institutions employ approximately 106,000 people, making it the largest collective employer in Houston and the world’s largest medical center.

Located on Almeda Road, just south of Houston’s Midtown neighborhood, the community offers a mix of one-, two- and three-bedroom residences across 12 four-story buildings, as well as two parking garages. It is the first property acquired by Waterton in 2015 and expands the firm’s footprint in Texas, where Waterton owns five other apartment communities in Austin and Dallas comprising approximately 1,400 units.

“Fueled by a robust and diversified economy, Houston has led the nation in job recovery since the recession, with employment in the city at an all-time high,” said Matt Masinter, senior vice president of acquisitions at Waterton. “This job growth has coincided with significant population gains – Houston added 138,000 residents between 2012 and 2013, more than any other metropolitan area in the country – creating strong demand for housing, especially in core, infill locations like the area around the Texas Medical Center.”

Waterton plans to make improvements to the community’s common areas and residential units, including kitchen and bathroom upgrades, and the addition of fenced-in backyards for 55 ground-level units – ideal for residents with pets.

“This deal gives us the flexibility to make improvements that not only benefit residents, but allow us to boost value over the long term,” said Masinter. “For us, it’s a classic value-add play and exactly the type of deal we look for, whether it’s in a new market like Houston, or any of the other cities where we own real estate.”

Villas at Hermann Park residents have direct access to nearby public transportation, including a shuttle bus service that transports people throughout the Texas Medical Center and has a stop directly in front of the community’s clubhouse.

“The central location of this community is one of its biggest selling points, offering convenient access to nearby parks, schools and major employment centers like the medical center and downtown Houston, just five miles to the northeast,” said Masinter.

Villas at Hermann Park is less than a mile from the Michael E. DeBakey High School for Health Professions, ranked No. 33 on U.S. News & World Report’s list of the nation’s best high schools, and minutes from several prestigious colleges, including Rice University, Texas Southern University and the University of Houston. More than 50,000 students in Houston are affiliated with the Texas Medical Center, which is currently undergoing a multibillion-dollar expansion.

About Waterton
Waterton Associates LLC is a real estate investor and operator with a focus on U.S. multifamily and hospitality properties. Founded in 1995 by David Schwartz and Peter Vilim, Waterton executes value-add strategies and manages a national portfolio of multifamily and hospitality properties on behalf of institutional investors, family offices and financial institutions. Waterton manages its investments through wholly owned property management subsidiaries Waterton Residential and Ultima Hospitality.

Waterton has a proven expertise in selecting and managing attractive risk-adjusted real estate investments located in major markets around the United States. Since its formation, the company has sponsored multiple investment vehicles and has invested over $5.3 billion in assets. Waterton is privately held by its co-founders and is headquartered in Chicago with seven regional offices throughout the United States. Waterton’s portfolio included more than $3.8 billion in assets as of September 30, including 20,000 multifamily units and 12 hotels. For more information, please visit www.watertonassociates.com. 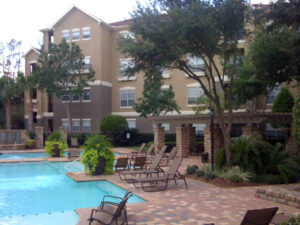 Waterton Associates LLC has entered the Houston market with its acquisition of the Villas at Hermann Park, a 320-unit apartment community near the Texas Medical Center.